The following article was published in Horse and Hound magazine a few days ago.  We would very much like your comments/opinions on it, Thank you: 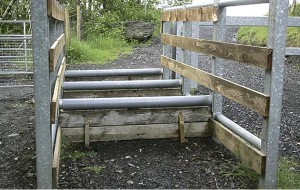 Bridleway users in the Neath area of South Wales are in dispute with a high profile figure in the racing industry and the borough council over a horse “stile” they say is unsafe.

Local riders told H&H they are unable to access part of the Great Dragon Ride because of the barrier, which has been erected to stop vehicular access.

The structure comprises four narrow, metal, raised pipes between two running rails and is sited on a popular stretch of bridleway in the Dulais Valley. This crosses the Walters Arena, an off-roading facility owned by Dai Walters, who also owns Ffos Las racecourse and co-owns Welsh National-winner Mountainous.

“I’ve been fighting [for its removal] for two years. It’s a miracle that there hasn’t
been a serious accident already,” said Chris Powell, district commissioner of the local Banwen and District branch of the Pony Club.

“Alterations have been made, but it’s still highly unsafe for horses and riders as the metal pipes are encased within plastic, which rattles when horses’ hooves hit them. Also, there is barely room for a horse to put a foot down between each bar.”

A spokesman for Neath Port Talbot council told H&H that it was aware of the issue.
“We are working with the landowner to bring it up to the appropriate standard,” he said. “Some improvements have already been made and those outstanding are scheduled for completion in the next few weeks.”

The British Horse Society’s Mark Weston confirmed that a site visit was planned for later this month to view the modifications, and added that the BHS receives relatively few complaints of this nature.
“There is a British standard to which horse stiles should be constructed. If any riders have an accident in relation to a stile it should be reported to www.horseaccidents.org.uk,” he said.